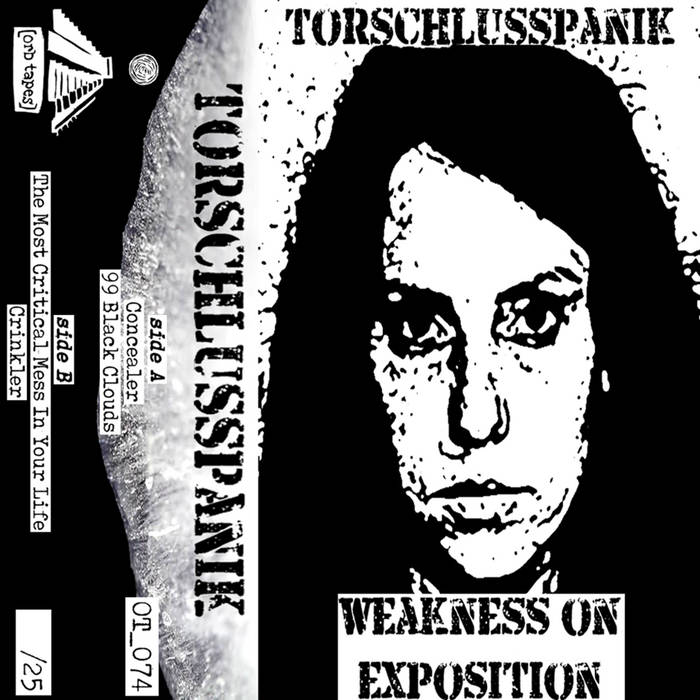 "Self-described as “harsh, maximalist electro-acoustic,” it could be argued that Luna Mitchell’s one-woman band Torschlusspanik from Cleveland, Tenn. has more in common with French 20th century masters of electro-acoustic music—music that relies on electronic recording technology—than harsh-noise contemporaries in today’s musical underground.

While Torschlusspanik’s work does incorporate bits of noise, it’s not an impenetrable wall of sound; instead, a more fundamental aspect is how each composition is meticulously arranged, often using tiny samples that thrust a piece forward serially, like a container hurtling through a pneumatic tube down a very specific path.

Torschlusspanik's latest album, Weakness on Exposition, released digitally and on cassette on the Pennsylvania label Orb Tapes, is another fascinating and constantly stimulating offering, drawing from Mitchell’s seemingly infinite catalog of sounds that are fired at the listener while ominous drones and tones skulk with an uneasy presence.

“99 Black Clouds” features a dizzying array of sounds—metal pieces being tapped, things being dragged, watery sounds, uncomfortable buzzes, rattling, sawing, electronic blasts, power tools, and much more—and it begins with a woman discussing her Asperger’s and how people don’t give others sympathy unless they’re relatable.

“The Most Critical Mess in Your Life” is the sound of disintegration and collapse, with jarring squeaking and squealing alternating with rustling noises, and a rare rhythmic moment is supplied from the sound of haunted machinery before the jumbled, disorderly ending.

Rather than a sequential unfurling, “Crinkler” uses two or three simultaneous sound-streams for another dimension of complexity, and it ends with a monologue from a British man talking about an acquaintance who can’t find employment after being displaced by the Fukushima nuclear disaster; “Sometimes if you’re outside the mainstream and you come back in, it’s very hard,” he says, perhaps appropriate for this world of music.

While this is difficult music, Mitchell has the rare ability to sustain interest in the listener by tirelessly pushing things forward; each small sound fragment is a link in a chain, seemingly with the intention that each tiny moment is allowed to be felt and heard, not obscured. It may be too much of a sensory overload for the uninitiated, but for this critic, it taps into an ineffable talent that goes beyond the elements of conventional music such as rhythm, familiar structures and melodies."