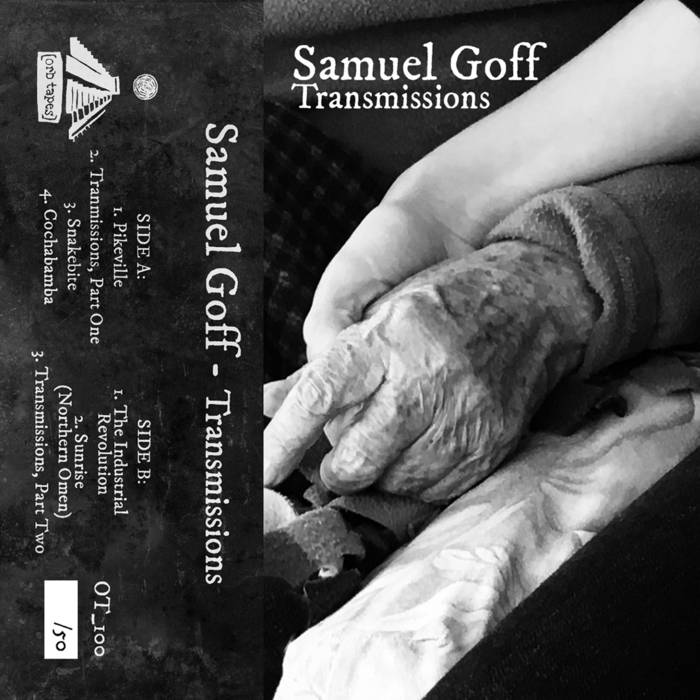 Transmissions is the first solo album by percussionist, writer, composer and improviser Samuel Goff. Based in Richmond, VA he comprises half of the distressed noise rock combo Among The Rocks And Roots and is a founding member of the avant improv collective RAIC. Transmissions is a multi genre album touching on musique concrete, avant garde, film music, isolationist minimalism, noise, drone soundscapes, polyrhythmic percussion, world music and industrial. The album, over a year in the making, was recorded at Etching Tin Studios and the University of Richmond in Richmond, VA with co-producer and engineer Richard Schellenberg. The album also draws heavily on field recordings and samples recorded during brief stays in Santa Cruz and Cochabamba, Bolivia. The album was mastered by Raffaele Pezzella aka Sonologyst in Italy.

The songs on Transmissions are all very personal concept songs that attempt to take the listener on a journey and tell a story without lyrics but with sound. Journeys are taken through the coal mines of Kentucky in the 1950’s, the isolation of deep space, Bolivia, turn of the 20th century Industrial Revolution and the horror of Colombian Catholic exorcism practices and ritualistic possession ceremonies. The album is the debut release of the new imprint Cacophonous Revival Recordings, who is co-releasing this on CD in conjunction with Orb Tapes.

All tracks recorded at Etching Tin Studios in Richmond, VA. between April 2017 and June 2018 except for "Snakebite" and "Sunrise (Northern Omen)" recorded at the University Of Richmond, July 2018.

From Samuel Goff:
"Thank you to Daynee Rosales for always having faith and supporting me at every turn. Abdul-Hakim Bilal for saving me from myself and being my musical life partner. Leo Heinzel for your patient ear and critique. Andy McGraw for allowing me to record at the University of Richmond. Richard Schellenberg for untiring patience and listening to all of my crazy ideas and making them a reality. Sevarin Goff for giving me another chance. Manuel Rosales and the Rosales family for taking care of me and guiding me around Bolivia. James Searfoss for agreeing to this project and for years of support. Also thanks to Raffaele Pezzella, TJ Norris, Yvonne O., Joseph McStannard, Sofi Rosales, Jules Hades and Brandon Orelanna."