by Sun Ra & His Arkestra 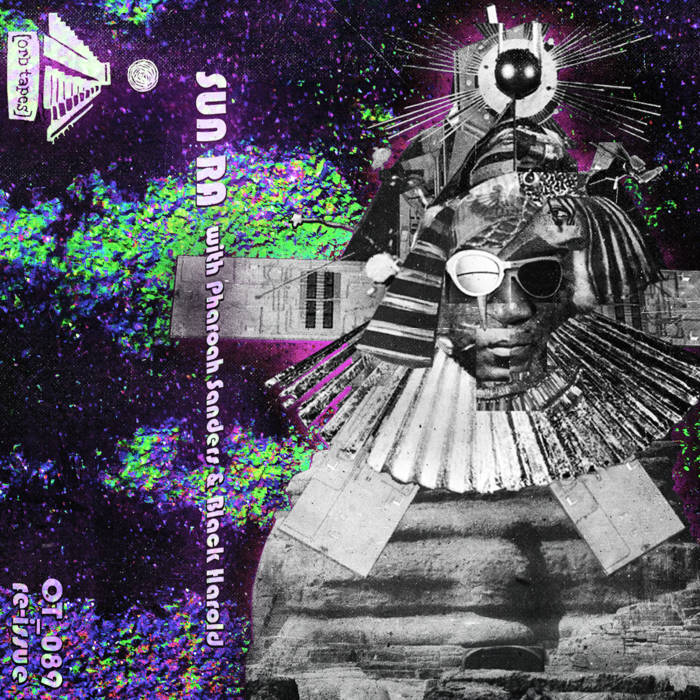 rushfalknor Sun Ra & Pharoah Sanders are two of my favorite musicians of all time. Having the two (amongst a cast of other legends) take me to other spiritual planes is a grand experience.

In November 1964, a number of New York musicians (including Sun Ra) formally banded together as the Jazz Composers Guild. Under JCG sponsorship, the series “Four Days in December” ran from December 28 through 31 at Judson Hall. Sun Ra and his Arkestra appeared on the 31st, along with the New York Art Quartet.

All of the music from the Four Days in December series was recorded by the JCG for its own label; a December 1964 announcement in Down Beat indicates that a sampler LP was planned as the first release. However, the Guild broke apart early in 1965, so this never came to pass. Later there were plans (again abortive) to issue the concerts on the Fontana label. Almost a dozen years later (1976), Sun Ra issued the LP "Featuring Pharoah Sanders and Black Harold" [comprised of tracks 6–11 of this digital edition].

Ahmed Abdullah (and the first edition of The Earthly Recordings of Sun Ra) gave the location and date as Cellar Café, New York City, June 15, 1964, but this cannot be right because at that time tenor saxophonist John Gilmore was still in the Arkestra. [Gilmore left the Arkestra in summer 1964 to go on tour—as Wayne Shorter's replacement—with Art Blakey and the Jazz Messengers; Gilmore is not on the Judson Hall dates.] The album serial number ["JHNY 165"] was clearly meant to indicate a concert at Judson Hall, New York City, in January 1965, and a copy in Alden Kimbrough’s possession bears the title Live at Judson Hall written on the cover in longhand. On Kimbrough’s copy Pharoah Sanders’ name is written on the label for Side A and Black Harold’s is written on Side B. The January '65 date seems to be a slightly inaccurate reference to the Four Days in December concerts. (1968 is incorrectly given as the date in some discographies.)

Basic personnel derived from a list given by members of the Arkestra to Bob Rusch. However, they forgot about Robert Northern. A review of Four Days in December by Don Heckman (Down Beat, February 11, 1965) gave a slightly different personnel list that referred to Pharoah as “Farrell Saunders,” added Ronnie Boykins (bass) and Jimmy Johnson (drums), and subtracted Cummings (bass clarinet) and Northern (French horn). Most likely Heckman was relying on a printed program (always dangerous with the Arkestra—there is no audible evidence that Ronnie Boykins was there, whereas Cummings and Northern definitely were). Heckman mentioned the titles “Other People’s Worlds” and “Water Lilies on Mars.” A.B. Spellman’s review of the concert indicates that “Water Lilies on Mars” was sung—which means it was not included on the 1976 Saturn LP. The Arkestra and the New York Art Quartet split the evening; the concert began no earlier than 8pm and finished at midnight. Most likely, then, some material from the Arkestra’s set remains unissued. [N.B. The full performance is included on this digital release.]

British discographer Mike Hames also mentioned a “Space Mates” from this session, but this was included on the LP (thanks to Julian Vein for this information). In the first edition of The Earthly Recordings, the Heckman and Hames information was thought to describe a different recording and was listed as a separate session.

According to Ra biographer John Szwed, Black Harold (or, as he was known in 1964 and identified by Heckman, Sir Harold) was formerly known as Harold Murray. He also played a large drum with the Arkestra (considerably larger than Jacson’s Ancient Egyptian Infinity Drum; regrettably, it does not appear on any known recordings). Harold also recorded in 1968 (as Sir Harold) with Galt MacDermot and (as Black Harold) with Big Black. According to Donald Leigh, he later changed his name to Brother Atu, and still later appeared as Atu Murray. Obviously a believer in having many names.

Recorded at Judson Hall, New York on December 31, 1964, as part of the Jazz Composers Guild's Four Days In December festival

Mastered by Michael D. Anderson of the Sun Ra Music Archive from the master tapes

Layout for re-issue by Dave Petersen