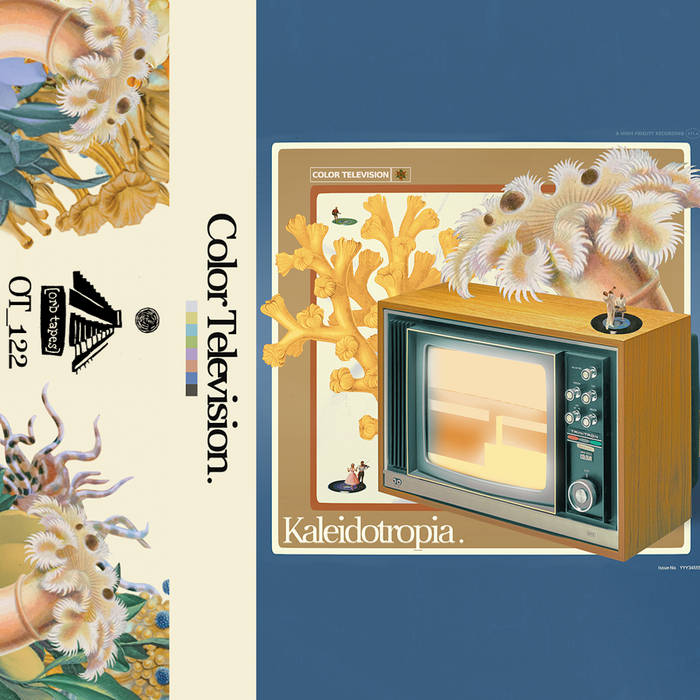 mankpit very enjoyable listen and cool cassette artwork... like to put in tape deck and have a bowl of cereal

The fabric of the rainbow, riding piggy-back on an invisible stream of electrons directly into your living room. Millions of phosphorescent particles are transmitted as radio impulses into space and are received through your Color Television set. Embrace true-to-life color so natural… vivid… sharp. Welcome to the World of Color. When tuning your Color Television set, be sure to always refer to your assigned TV Guide for optimal viewing and listening pleasure. General Sarnoff and his crack team at Station Five have paid special care to provide every citizen of Kaleidotropia with the most spectacular array of sights and sounds in the galaxy.

You must have decided, sooner or later, you’re going to have the best in Color Television. Why not now? Don’t ever shy away from luxury. Color Television brings distant stations from across Kaleidotropia with more picture-pulling power to assert your home as a zenith in audiovisual splendor. Is it wrong to want the sounds of your day reproduced in the highest fidelity? Never. Station Five broadcasts day and night to ensure a continuous feed of programming excellence bound to the beams of the Telefield.

Discover the beauty of the island and enjoy the rays on the shoreline. Home to a plethora of flora and a sanctuary to the best and brightest in entertainment, Kaleidotropia is the premiere Class B province to experience. On the island you will find the Telefield, the largest Videophone ever constructed. The jungle neighborhoods are located near a fresh water source and a plentiful garden providing every citizen with the nourishment and sensory input they desire. You’ll swear you stepped right out of a dream. The sights. The sounds. The illustrious glow of the Station Five radio tower. It all feels so unbelievable it could be an alien planet, yet when the ship reaches the shore, you know how you never called anywhere else, “Home."

All music by Hayden Beck

All artwork by Jared Netzel

Mastered by Alex Inglizian at the Experimental Sound Studio